How We Helped a Client Restructure His Debt Finance Tax

Debt restructuring and consolidation often sounds (to the uninitiated) like a failing business’s last-ditch effort to restore liquidity; however, there is much more to the process than just rehabilitating a company in financial distress. It is a tool that allows a business to improve cash flow and manage their finances more effectively by renegotiating payment arrangements or restructuring their borrowings. Seen in this light, debt restructuring becomes an effective vehicle to grow a business.

Sadly, the success rate among companies who have undergone a restructure has been markedly low over the past few years—only 4.4 percent in February 2014, already a significant drop from 2008’s 7.1 percent and a pittance next to the 14 percent high of 1999. These statistics, however, apply only to those companies that were already facing insolvency before they began the process. No word on whether early restructuring would have upped their chances of success, but a stronger cash flow does have its benefits regardless of your standing. 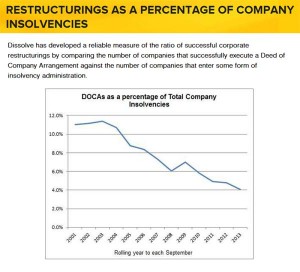 If you’re contemplating a restructure, the thing to remember is that it requires a realistic appraisal of all your existing financial relationships. What could happen (and does happen in a lot of cases) is that you get a wakeup call about certain financial structures which you thought were cost-effective but were actually missed opportunities in the context of your overall capital management strategy.

Such was the state of affairs in today’s featured case. Below is a breakdown.

When our client first came to us, he was looking for a simple refinance of his parents’ residential property, the apparent end goal being to try and reduce the cost of their current funding. While we were quickly able to reduce this by $1,500 per annum, the savings proved to be insufficient in light of our client’s busy lifestyle.

Upon further inquiry (which is part and parcel of Winquote’s ‘duty of care’ approach), we realized that our client’s needs went beyond the refinance. We decided to do a thorough financial health check, the new goal being to explore alternative financing structures which, implemented the right way, would maximise the benefits and exemptions to which our client was entitled.

A bit of background on the client and the financing structures he had in place prior to consulting Winquote: Our client owns a business in IT services and had purchased a commercial property which was leased out to a manufacturing business. On the surface, the arrangement seemed beneficial. But as there was absolutely no debt against this property, the client was ineligible to receive any interest deductions from it.

His parents provided a temporary solution by gifting him a portion of the money for the purchase, which they obtained from their equity in their residential property. They weren’t getting any interest deductions from this debt, either—another downside.

Finally, the client was paying back the gift to his parents as a soft loan, which meant that he was doing so on a post-tax basis—again, no benefits.

What we helped the client realise was that he could stand to save much more than $1,500 per annum IF there was debt on the property payable on a pre-tax basis. Our recommendation was that he draw against his commercial property and repay his parents the funding they had gifted him. The proviso was that he had serviceability of the debt, which he did—through his own income and the rental income from the property itself.

The solution seems so simple—saving on tax rather than on interest—but it’s not uncommon for SMEs to overlook these benefits. This kind of problem stems from focusing too much on a particularly problematic financing structure and failing to recognise that it is only a small part of one’s comprehensive capital management framework.

Our advice saved our client approximately 30 percent of the interest payments. He was able to realise this amount due to the fact that he was now able to pay his debt using his pre-tax income rather than his post-tax income.

At Winquote, we understand the true cost of capital and are therefore able to take a big-picture approach to debt and financing. We make a point of investigating all viable avenues for financing during a restructure. If there’s something like a tax-effective facility you’ve been overlooking all this time, we’ll be sure to let you know.

We’re more than just a finance intermediary; if you’ll let us, we’ll be your key relationship manager, giving you the full advantage of our solid understanding of finance, our knowledge across other associated professions, and our accreditations with multiple lenders. Our goal is to help you achieve the optimal financing structure for your needs, and peace of mind throughout the process to boot.

To learn more, feel free to get in touch with our representatives. We’ll be happy to provide a free finance health check for your situation.

How We Helped a Client Develop a Successful Property Portfolio

How often should you review your

Securing finance in the next 90